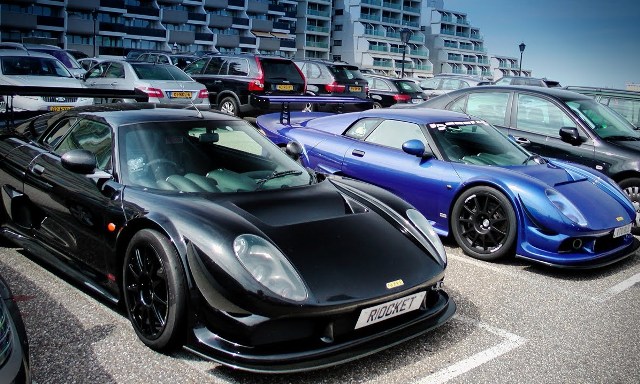 "Staggering" sums up the new Noble M400 and it also describes the Noble M12 GTO-R3. The cars are almost the same, except that the M400 is much more powerful and has been reworked extensively to make it perform better on the race track. But it's still a road car.

The performance of these supercars is just stunning a 0-60 time of under 3.8 seconds with a maximum speed of over 170 mph for the M12 GTO-R3 puts it in the league of super-quick supercars. Not fast enough? Well, the M400 has a top speed of around 185 mph, and can reach 60 mph in 3.5 seconds.

The Nobles are low coupes, with the look you can only get with a mid-engined layout. Above all they're amazing value the M12 GTO-R3 is yours for about $100,000, and the M400 costs about $120,000. These are sports cars in the true tradition of modern sports and racing cars started by the likes of John Cooper, Colin Chapman and Eric Broadley light, simple with good road holding.

It just shows that you don't need 6 liters or more with 500 plus bhp to build a supercar. Sure, with 500 bhp you can get to 190 mph or more, but off a race track that doesn't mean a thing.

So who's Noble? It is a small firm started by Lee Noble, who has designed a number of kit cars before starting his own company to produce a supercar. His aim was to produce a car that was spacious and civilized, and that "anyone could drive fast without feeling intimidated." Now they produce over 200 cars like that each year.

The Nobles look the part, with the typical low nose and an air dam stretching across below the three air intakes. The lamps are the small, modern halogen type, behind streamlined plastic panels. In the sides are neat air intakes forward of the rear wheels, which apart from being useful, break up the slab look of the sides all the air intakes are larger on the M400 to improve cooling. The sloping roof extends into flying buttresses that slope back into the tail on each side of the engine cover. At the rear, one spoiler is built in, but there's also a wild separate spoiler on a pair of legs above the tail.

Inside, the layout is simplicity itself, with the main instruments in individual pods right in front of the driver, and the minor instruments on the central console. The short gear level pokes up above the deep central tunnel.

At the heart of each Noble is a twin-turbocharged 3.0 liter V-6 mounted amidships and driving through a six-speed gearbox to the rear wheels. The car is very light and this is where the performance comes from: the combination of plenty of power, light weight and a small frontal area.

It's hard to believe that the 352 bhp V-6 engine of the M12 GTO-R3 starts life as Ford's all-aluminum unit. Most of the internal parts are either replaced with special Noble ones, or are modified to improve performance. The twin turbocharger installation is Noble's own, and these tiny units are responsible for boosting power to 352 bhp at only 6,200 rpm that's 118 bhp per liter, the same as the Ferrari Challenge Stradale. Maximum torque of 350 lbs ft is produced all the way from 3,500 to 5,000 rpm, giving massive mid-range power.

To boost the power output of the M400 to 425 bhp at 6,500 rpm, high lift camshafts are installed with a pair of larger turbochargers. A side effect of the extra power is that the maximum torque of 390 lb ft (529 Nm) is produced at a higher speed, reducing low-speed torque a little. The fuel management system is new, and to suit the racers, the limiter cuts in at 7,200 rpm instead of 6,400.

With that much power coming out of such a small pot, forged pistons replace the cast ones, and there is a large baffled sump. An air-cooled oil cooler is also standard.

Currently, Noble is the only user of the six-speed close-ratio box fitted to the V-6. It is built by Getrag, the German specialist. The engine is mounted across the frame, so the gearbox and axle gears are in one unit, providing one of the most compact power train packages in the business. A new gear shift mechanism has been adopted for the M400.

Simplicity is the theme with the chassis frame it consists of a steel tubular space frame to which aluminum panels are bonded and riveted. The result is light weight and great stiffness all at a fraction of the cost of the carbon fiber composites and aluminum space frames used by Noble's competitors.

Practical considerations have not been forgotten as they often are on super sports cars. Both the nose and tail section hinge up to give plenty of access to the mechanical units.

The suspension is typical of supercars, with double wishbones front and rear. The uprights are aluminum, and there are the usual spring/damper units at each wheel. For the M400, dampers with aluminum tubes are used, and there is an anti-roll bar at the front the M12 GTO-R3 doesn't need one, but for the track less roll was deemed useful.

This little pocket supercar it is only 161 in long weighs only 2,380 lbs (1,080 kg). Little wonder that the performance leaves owners of very powerful, exotic and expensive machines gasping. With 335 bhp per tonne you're just bound to be able to accelerate as fast as the tires can grip and the M12 GTO-R3 has a special differential to prevent much excessive wheel spin on one wheel.

With its greater power output 143 bhp per liter and slightly lower weight, the M400 has a power:weight ratio of 400 bhp per tonne! That is extraordinary, and is one of the reasons the Nobles are so fast.

Definitely a pair of compact supercars that make you think again about what you need to drive fast. The answer could be a Noble!

February 18, 2022
Kia car company has released new models at Paris motor show with new features a stylish exterior with a prominent grille, LED-infused headlights and a sloping roof-line. Despite being slightly smaller than its predecessor, the car has a longer wheelbase which results in a spacious cabin, the new models it’s called Kia Carens. This car its sleek and sculpted design marks a dramatic shift away from the more utilitarian look of its predecessor. The new Carens models has will be available with either five or seven seats, both delivering generous room for all occupants. The Carens is based on the latest Kia Ceed. It’s likely to available in the UK with three engines, including two 1.7-liter diesels and a 1.6-litre petrol unit, all with stop-start. The full UK line-up will be confirmed early. The new Carens has all packaging capabilities of Kia design and engineering teams to create more space in a car with a smaller footprint. It is 20 mm shorter, 15 mm narrower and 40 mm lower than its pre
Read more 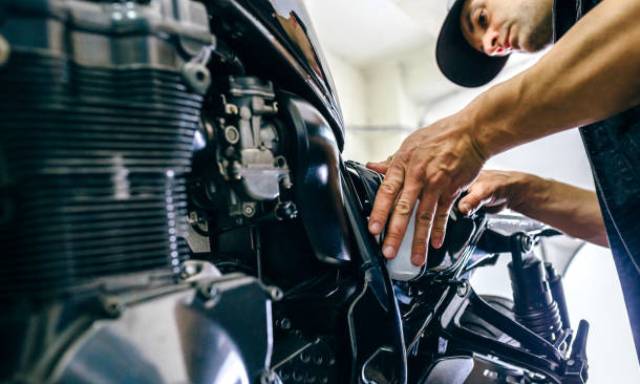 Suzuki Motorcycle Service Skill Competition Asia was attended by no less than 28 participants from 11 countries in Asia. Suzuki Motorcycle Service Skill Competition Asia was held at Thai Suzuki Motor Co ,. LTD, Thailand. The purpose of this event is to test and improve the abilities of mechanics. The desired increase is to be able to provide the best service to loyal Suzuki customers in every country in Asia. With the existence of a reliable mechanic, it is expected that consumers can gain trust. Suzuki Motorcycle Service Skill Competition Asia event is divided into two categories. The first category, category A, is for mechanics who handle motorbikes of 650 cc and above. Then there is category B for mechanics who handle motorbikes of 150 cc and below. The test of the ability of the Suzuki Asia mechanics is divided into several tests. First is the written test. This test is done to find out how much the mechanics know about service. Then the test is continued with On-Parts Examination.
Read more

A Review of Honda City 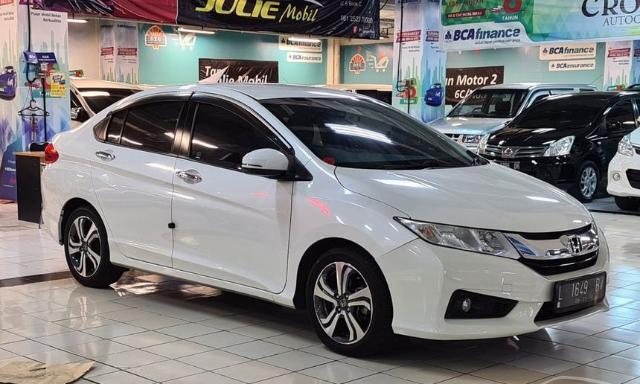 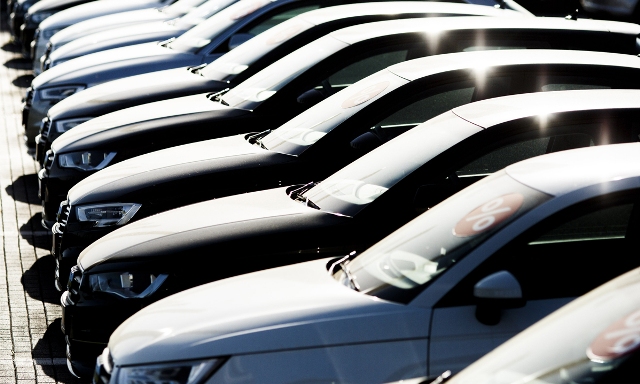 Are you tired of wasting money on car repairs and want to get a used car at a cheap price? Well then here we provide you with the right kind pf information you were looking for all this while. You would find a lot of resources which would provide you with best deals on used cars at cheaper rates. There are number of points that are to be considered while you plan to buy a second hand car. And it is necessary to follow them to be on the safe side. Take sometime to plan on what is your desired budget and the type of car that is exactly required by you. While making the deal you must consider if there is a car insurance and registration done previously Be quick in making the deal, as often situations arises when the car you wanted got sold just before you commenced on the deal Always ask for records of the car repairs so that you get to know if you are about to make the right deal. Keep bargaining with the price, until you think that you have just made the best deal Before making the deal
Read more 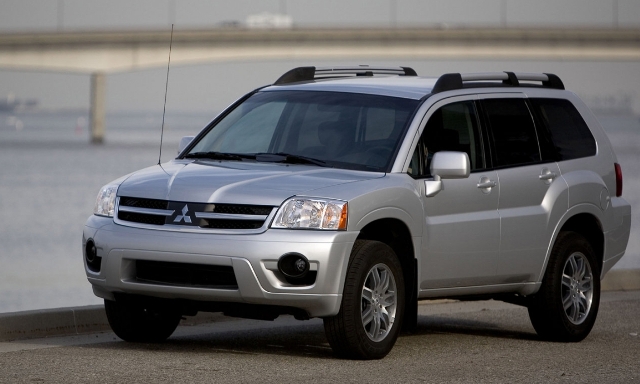 Mitsubishi Endeavor has announced that a facelift version of the popular SUV. The new model has a free navigation and sunroof package for both versions SE 2WD and AWD. This includes premium seat fabric, a 6-speaker AM / FM / CD audio system with MP3 playback and Bluetooth hands-free voice recognition and steering wheel with cruise control. Please order the Endeavor SE get another astounding 360-watt Rockford Fosgate-6 CD/MP3 sound system. Mitsubishi Endeavor is 3.8-liter V6 with 225 hp at 5 000 rpm and 255 lb-ft at 3 750 rpm rotation speed. The engine is paired with a 4-speed automatic transmission with Sportronic INVECS-II technology. The vehicle is equipped with 5-star safety rating for both driver and passenger. The crash tests conducted by NHTSA. In addition, Endeavor features SRS, ABS, EBD, TCS, and TCL. Last but not least comes the SUV with TPMS (Tire Pressure Monitoring System).
Read more